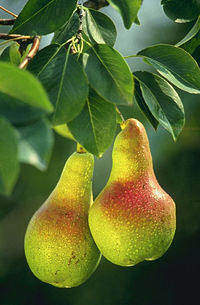 Homemade pear honey has the consistency of honey, is sweet and flavorful and, since you can either use juice or peelings from making canned pears or pear butter, is a good way to use all of the fruit! It is generally made with fruit juice and sugar, but you can use other sweeteners, like Stevia (in a prepared form like Truvia, it measures same as sugar; if you use another form, you'll need do your own conversion) - or Splenda, if you prefer, or honey from bees. Making and canning your own Pear honey is so easy. Here's how to do it, in simple steps and completely illustrated. I'll discuss pears below, but you can substitute pears, pears or nectarines! Any variations will be spelled out in the directions inside the pectin.

See this page for pear-picking tips.

See this page for blueberry jam, this one for fig jam and for berry jams, see strawberry, blackberry, raspberry jam For easy applesauce or apple butter directions, click on these links. I've got some other pages for specific types of jam and butters, too, see this page.

This example shows you how to make fruit honey from pears (and other stone fruits)!

If you are starting with pear juice, skip to step 5.

Step 1 - Pick the Pears! (or buy them already picked) 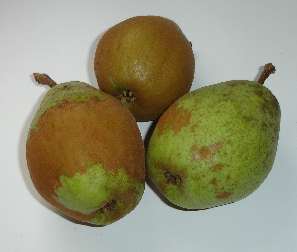 It's fun to go pick your own and you can obviously get better quality ones!

I prefer to grow my own; which is really easy - but that does take some space and time.

It takes about 4 to 8 cups of pears peelings - you'll need about a dozen pears to get this many peelings.

Step 3 -Wash the fruit and sort!

I'm sure you can figure out how to wash the fruit in a colander of plain cold water.

Then just drain off the water!

Peel the pears.  Pears have such thin skins, you can use a potato peeler.

You can now eat the pears, or can them or make pear butter, etc.

For this recipe, we only need the peelings.  Save all washed, sound pieces and peelings from the pears. (if you are peeling the pears in advance, keep the peelings refrigerated until ready to use).

Step 5 - Make the juice from the peelings

Cover the peelings with the water and slowly cook in a covered saucepan until they are soft. Then put in a cheesecloth bag and press to remove all juice. Drip the juice through a jelly bag and measure. The goal is to clarify the juice.

Step 6 - Wash the jars and lids

Now's a good time to get the jars ready, so you won't be rushed later. The dishwasher is fine for the jars; especially if it has a "sanitize" cycle, the water bath processing will sanitize them as well as the contents! If you don't have a dishwasher with a sanitize cycle, you can wash the containers in hot, soapy water and rinse, then sanitize the jars by boiling them 10 minutes, and keep the jars in hot water until they are used.

Canning jars in the dishwasher NOTE: If a canning recipe calls for 10 minutes or more of process time in the canner, then the jars do not need to be "sanitized" before filling them. But really, sanitizing them first is just good hygeine and common sense!  See this page for more detail about cleaning and sanitizing jars and lids.

Put the lids into a pan of hot, but not quite boiling water (that's what the manufacturer's recommend) for 10 minutes, and use the magnetic "lid lifter wand" to pull them out.

Leave the jars in the dishwasher on "heated dry" until you are ready to use them. Keeping them hot will prevent the jars from breaking when you fill them with the hot jam.

Lids: put the very hot (but not quite boiling; around 180 F, steaming water is fine)
water for at least several minutes; to soften up the gummed surface and clean the lids.  I just leave them in there, with the heat on very low, until I need them!

Get them all here, delivered direct to your home, at the best prices on the internet!

Place the juice in the saucepan and heat over medium to high heat. When it boils vigorously, add the sugar at the rate of one-half as much sugar as juice. Boil it down rapidly until it achieves the consistency of honey. 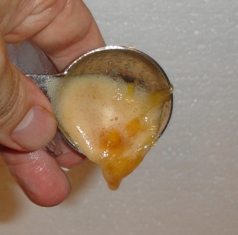 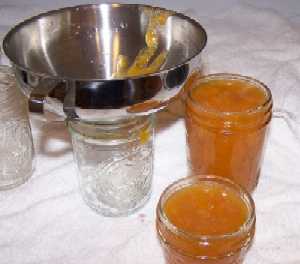 Fill them to within 1/4-inch of the top, wipe any spilled jam off the top, seat the lid and tighten the ring around them. Then put them into the boiling water cann 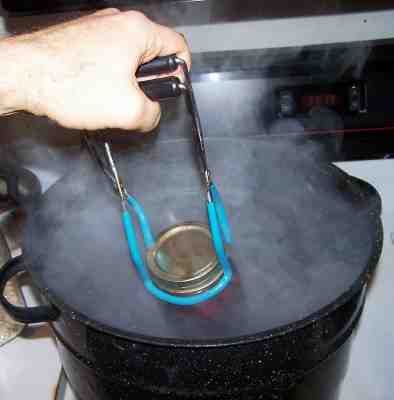 This is where the jar tongs and lid lifter come in really handy! 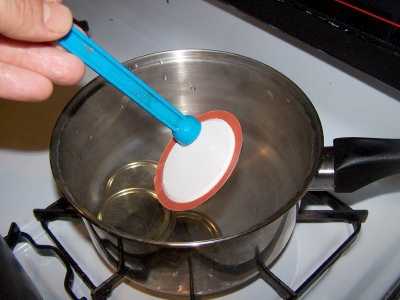 Step 9 - Process the jars in the boiling water bath 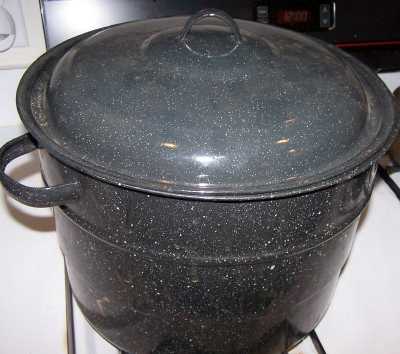 Keep the jars covered with at least 2 inches of water. Keep the water boiling. In general, boil them for 5 minutes.  I say "in general" because you have to process (boil) them longer at higher altitudes than sea level, or if you use larger jars, or if you did not sanitize the jars and lids right before using them.    The directions on the pectin tend to be pretty conservative.  Clemson University says you only need to process them for 5 minutes.  I usually hedge my bets and start pulling them out after 7 minutes, and the last jars were probably in for 10.  I rarely have a jar spoil, so it must work.

Note: Some people don't even boil the jars; they just ladle it hot into hot jars, put the lids and rings on and invert them, but putting the jars in the boiling water bath REALLY helps to reduce spoilage! To me, it makes little sense to put all the working into making the jam and then not to process the jars to be sure they don't spoil! 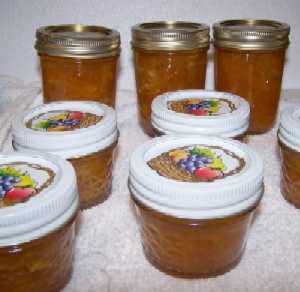 Lift the jars out of the water and let them cool without touching or bumping them in a draft-free place (usually takes overnight) You can then remove the rings if you like, but if you leave them on, at least loosen them quite a bit, so they don't rust in place due to trapped moisture. Once the jars are cool, you can check that they are sealed verifying that the lid has been sucked down. Just press in the center, gently, with your finger. If it pops up and down (often making a popping sound), it is not sealed. If you put the jar in the refrigerator right away, you can still use it. Some people replace the lid and reprocess the jar, then that's a bit iffy. If you heat the contents back up, re-jar them (with a new lid) and the full time in the canner, it's usually ok.

Once cooled, they're ready to store. I find they last up to 12 months. But after about 6 to 8 months, they get darker in color and start to get runny. They still are safe to eat, but the flavor and texture aren't as good. So eat them in the first 6 months after you prepare them!


Can't find the equipment? We ship to all 50 states!

Use our Feedback form!